Students have their say at UactivE action planning event 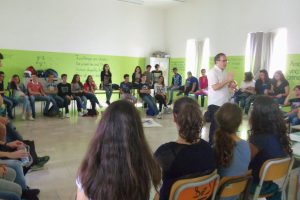 The SPAcE project is currently implementing action plans across five EU cities/towns in Greece, Italy, Latvia, Romania and Spain that should dictate guidelines for the creation of Urban Active Spaces. Specifically for Palermo, CESIE choose schools as the target setting to promote the development of active areas  within the school environment. The idea for the schools in Palermo is to implement actions that are viable and economically efficient at local level.

On 27th of May CESIE organised an event at the “Benedetto Croce” Lyceum school in Palermo to disseminate at local level among teachers and students the results of the working group that drafted the action plan.

During the meeting, which involved fifty students of two classes (a first and a fourth grade class) and two teachers, CESIE presented the results of the working group to discuss with teachers and students the three main ideas elaborated by the working group experts: active school districts, urban trails and school gardening. Students developed a SWOT Analysis for each action designed by the working group and also worked as a team with the techniques of creative thinking to rethink the spaces in their school and make them more “active.” Through the “SCAMPER” technique, five groups of students rethought the recreational spaces, redesigning their school lobby in a creative way.

CESIE is continuing to work with experts from the working group to finalise the action plan which is expected to be completed by October 2016.

“SPAcE – Supporting Policy and Action for Active Environments” is a three year project co-funded by the Sport: Collaborative Partnerships action of the Erasmus+ Programme and aims to integrate active transport programmes. The overall aim of the SPAcE project is to make the healthy choice the easy choice through creating sustainable urban active environments in cities and towns across the European Union.

The project comprises of 10 partners from across 8 EU countries and includes regional governments from Latvia, Romania, Spain and Greece; Higher Education institutions from the UK (Gloucestershire and Oxford), Switzerland and Greece; non-profit government funded organisation from Finland and an NGO from Italy. The project also exchanges with relevant WHO activities and networks.

More information about the SPAcE project can be found at: www.activeenvironments.eu or contact: rosina.ndukwe@cesie.org.

← SPAcE: The Palermo Action Plan is on its way!
Brasov: Urban Active Environments for bikers →